Slots.lv is a U.S.-friendly online casino that welcomes members from around the world. The casino offers a fantastic game selection as well as lucrative bonuses and an excellent rewards program.

Once you’ve played through your no deposit bonus, if you decide that Slots.lv is for you, then you can take advantage of the welcome offer. The minimum deposit at Slots.lv is $20. Use the coupon code HELLOSLOTS200 to have your deposit matched by 200 percent up to $1,000. So, if you deposit the minimum, you’ll receive a $40 bonus, and you’ll need to deposit $500 to claim the maximum.

The standard wagering requirement for deposit bonuses at Slots.lv is 35 times the bonus plus the deposit used to claim it. This applies to the initial deposit bonus discussed above as well as the bonuses we’ll explore in the three sections to follow. Let’s say you made a first deposit of $100 and claimed a $200 bonus. Zeroing out your account meets all obligations, but if you come out ahead, you’ll need to play through ($200 + $100) x 35 = $10,500 before you can make a withdrawal. Once you’ve met that condition, the bonus is cashable and there’s no limit on cashing out.

Not all games contribute to the rollover requirement equally. Wagers on slot machines, keno, scratch cards and all specialty games do contribute 100 percent. Most table games only provide 20 percent, which would effectively increase the requirement example above to $52,500. Blackjack and video poker bets count for only 10 percent. Baccarat and roulette count for only 5 percent, and craps bets don’t count at all, which means that you can’t actually use bonus money on craps until it’s played through at least once.

If you’ve played through your welcome bonus, Slots.lv offers the HELLOSLOTS100 code, which matches your deposit by 100 percent up to $500. The promo code HELLOSLOTS200 can be used only once, but HELLOSLOTS100 can actually be used eight times. For the average gambler who places nine $20 deposits, that’s a $2,000 bonus, and high rollers can max this promotion out with a whopping $5,000!

If you prefer to use bitcoin over credit cards, e-wallets and the like, then Slots.lv has a special promotion for you. Note that this doesn’t supplant the welcome package described earlier. You could take advantage of either one in any order.

We highly recommend using the Bitcoin deposit method because there are no deposit or withdrawal fees AND payouts are MUCH FASTER!

Slots.lv also offers the coupon code SLBITCOIN150, which you can use after SLBITCOIN300 and up to eight times. This promotion matches any bitcoin deposit of at least $20 in value by 150 percent up to $750. Maxing out both SLBITCOIN300 and SLBITCOIN150 would net you $7,500.

Making your first real money deposit automatically enrolls you in MySlots Rewards, which is the loyalty and VIP program at Slots.lv. The program has eight rewards tiers:

As a new depositor, you’ll have access to Depositor Rewards. Once you’ve accrued 2,000 Reward Points, you’ll upgrade to Signature Rewards. You’ll earn one Reward Point each time you wager $1 on slots or $4 on any other casino games. You do earn partial credit, so if you spin 50 cents on one slot machine and then 50 cents on another, that would earn you one RP. For every 10 RP you earn in a given month, you’ll receive an entry for a draw to win a $1,000 grand prize or one of four $500 secondary prizes. 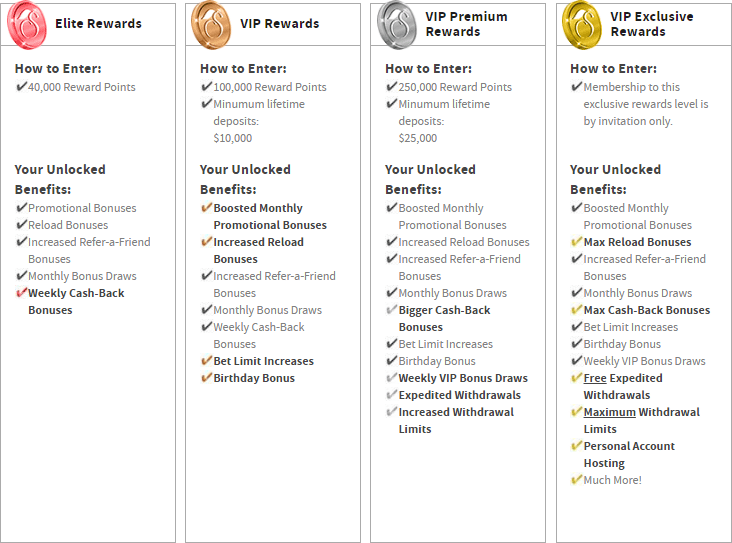 Your status is based on your activity for the previous month. If you earn 5,000 RP in September, you’ll have Superior Rewards status for October, and you’ll need to accrue 5,000 RP again that month in order to maintain it in November. MySlots Rewards status is simply a matter of reaching an RP milestone until you get to the VIP tiers. You can’t access VIP Rewards and VIP Premium Rewards until you’ve made $10,000 and $25,000, respectively, in total deposits. The VIP Exclusive Rewards status is earned by invitation only.

Have a friend that likes slots too? Refer them to earn a free chip. If you have many friends, you’re in luck because there’s no limit to how many times you can claim a free bonus this way. When a referred friend makes his or her first deposit, Slots.lv will give you a 100-percent match up to $200. Better yet, if you’re at the Superior Rewards level or higher, the casino will give you a second bonus the next day that matches your friend’s deposit by 300 percent up to $300.

Great customer service! So friendly and tried to help me above and beyond most! Great games ! Good game play! Can't wait to play Slots Lv agen!

This was the first casino that I played I won $1,800 on the 17th I have a check at my door on the 21st Amazing!!! Thr5 service has always been great I won with two other casinos one. I never got the money the other took 6 weeks. I haven't found anyone comes close to their service. I work in customer service so I know what constitutes good customer service. The games are phenomenal I recommend it to anyone keep up the good work guys?

+1 208-262-1367. I have never cashed out at this casino but that's my fault I make small deposits of adv 30-40 usd and regularly rack up several hundred and a few times thousands but I just like to play more than dealing with the paper work bull this is a part of online casinos I hate but they are all the same so consitant points I guess .but the games are great and pleasant customer service techs make this and a few others I play at a joy so stop hating .

Also received my $22 free with your promo code, thanks! I feel the games are pretty fair, I ended up losing the $22 but it wasn't my money anyways. Will be making a deposit since I really like the casino - just need a bitcoin wallet first. No fees with bitcoin!

Janet
by Janet
Best casino out there

Slots.lv is simply the best online casino out there. They have amazing games and I was able to deposit and start playing in 30 seconds. I won some money and requested a check for half the amount and received it very quickly. I understand that payments is the most difficult aspect with online casinos and I had no problems at all. I plan on playing more here!

when i first started playing on slots.lv i deposited 20 bucks with a rollover requirement bonus. I cashed out the next morning and received a check for 700 bucks a day later! havent won a thing since

sandra
by sandra
games in favor of casino

Just like Ashley Almost everytime i have deposited i spin it in in about a minute without wins at all once i was shocked i won $1 on a $3 bet, couldn't believe it. Amazing. i hit that after 11 $3 spins. then i did not hit another win before losing all of my deposit. everytime i go through the deposit in a under a minute. the random number generator is in their favor and needs to be inspected without warning them it is being inspected so they can't set it within legal parameters before it happens. (Legally it has to be set so it is alittle more than half in players favor) no scheduled appiontment just show up. and they need to be surprised with an audit from the USA tax comission since they allow USA players.

They also need to have alot more no deposit bonuses throughout the year. all other casinos i play have one sometimes in between every deposit you make and others have them weekly. they have had 3 i have qualified for over a year of being a member of their casino.

I redeemed free $22 code and played for a few days on it. I cashed out the max. of $100 and received a check via Fed ex three days later. This was the easiest, fastest transaction I had ever had from anywhere. No runaround.

Slots.lv was contacted on behalf of this review. The management told us that the user deposited via BillPay and did not include the correct account number. The security systems are tight in this respect. See management's response below:

"From what I got from accounting/security department is that when she made her deposit via BillPay, she didn't include her account number properly which caused the delay in the funds being issued to her account.

The security department is dealing with her now as she threatened to charge back all her deposits, they just want to educate her that she can't make those threats and that they apologize for the situation but if she makes those threats again they will end up closing her account due to fraud risks."

I do not recommend this casino, I have been playing online for over 10 years and have never experienced such awful service. It has been 6 days since I maid my first deposit, which I was happy about as they offer bill pay as an option. I have over 30 emails going back and forth and I still get the same cookie cutter copied and pasted response and still no money credited to my account. I can handle the bade service I suppose but to not be credited my money that is another thing, this is not even about a bonus, this is money I paid and have proven with banks slips and still nothing. To top it off my account has been disabled 2 times because they claim I am in the USA which I am not, ironically both times after I sent a firm email regarding my missing money. I also think the set up is awful and the games are pretty crumby, I have deposited via DBT while waiting for my other amount to show up and I can run through a 20 in seconds, no wins, no bonuses. All and all they better get their act together or they won't last in this competitive industry where there are amazing no hassle casinos all over. Once my issue with my missing money is fixed I will never use them again. Do not recommend!